↓ Skip to Main Content
Home › News › The Acceleration of the Promise

The Acceleration of the Promise 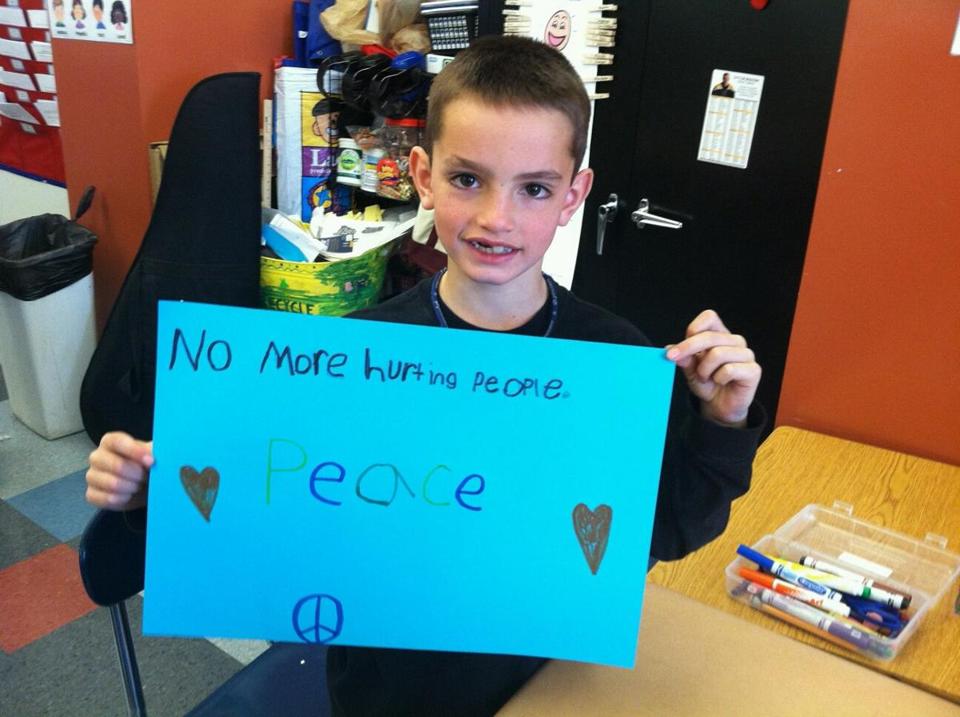 You may remember the story about Martin Richard, the 8-year-old boy killed in the Boston Marathon bomb attack, who once held a sign that said ‘peace’ and ‘no more hurting people. Somehow kids start out knowing where it is we adults are trying to get to. Reminders should never be at such a price. That’s where we’re supposed to come in for the kids; it’s the other way around too often, I sometimes think.

On a recent trip visiting churches in California, The Rev. Dr. Jane “Janie” Adams Spahr, founding minister evangelist of That All May Freely Serve (TAMFS) and I met with the Rev. Dr. Hampton “Hamp” Deck of the First Presbyterian Church of Vallejo, California. In a conversation about our work and spiritual lives, we each expressed the sense of a deep longing that seems to be churning just below the surface of, well, everything.

Janie and I recounted to Hamp how our meetings with so many folks ultimately turned to this discussion of “presence” so strong that it is almost palpable in our lives and everything around us. Hamp acknowledged that he knew this well, saying that a friend of his refers to “churning” as the “great ontological ache of our times.”

It made sense. The “ache” had little to do withÂ painÂ as we refer to it in our daily lives, but more as “giving birth” within a universe that is anticipating a new hope, compassion, promise, and love. An advent, as in the time preceding birth of Jesus; a shifting swing of the eternal pendulum bringing us into an age of the possible in which we believe. It’s the promise we know so well; a promise that is held across many faith traditions; a promise of love accelerating, even in the midst of great sorrow andÂ turmoil. Especially in a time of peril…

When I began this blog, I began it in response to a specific set of circumstances that had to do with churches leaving ourÂ denominationÂ  Â While some churches in the Presbyterian Church (USA) have found it necessary to leave the denomination because of differences, and while presbyteries have been trying to establish procedures for a “gracious separation” to deal with these painful separations, avoiding some some of the early rancor and litigation that surrounded division – even this scenario is changing. I can’t help in thinking that even in our better planned and “gracious” division that we are simultaneously shifting into a time that is calling us to a more “gracious union” not a terminus and farewell. And so, graciousunion.org was begun to try and talk about this and what it might mean and to discuss how the impact of how we gather and divide more broadly reflects our beliefs to one another and the world in which we witness.

None of this is to say that all the churches who plan to leave the denomination have done so or are going to change their mind. It is not to say that those things which caused the stir: differences in theology, women’s ordination, full inclusion of the folks who are LGBTQ, marriage equality, and more — are all resolved and those who remain of one mind. It is to suggest that we are approaching a newly-revived denomination as a result of these struggles and that the gifts of this revival, born through theÂ sacrificesÂ of many, is, in fact, providing us with an opportunity to come together in ways that have not been seen for a very long time, if ever before.

The acceleration of the great shifting is all around us and in everyone’s talking points, both within and without the denomination. “It’s happening so fast…” is usually part of the narrative, and yet theseÂ changes, like any other great reformation, have long been struggled for, long sacrificed for, and are now emerging on the shoulders of those who have carried us to this point. This movement of the Spirit truly comes out of those who have led us, lead us now, and will take us into the future; it is not a movement in free fall or on a path to self-destruction. Quite theÂ opposite if viewed with a wider vision. It is, I think, theÂ urgings of the Gospel that pulls us forward with the two greatest of the commandments and with a charge to stop the cynicism, arguing, fighting,Â legislativeÂ attacks, exclusionaryÂ practicesÂ and more. It is a call, I think, to stop the fighting and live into the commandments of love for God and one another; commandments that bring us together, witnessing to one another and the rest of the world that the ontological ache for which many have no words is real and an advent not an apocalypse.

All this, while trusting in God to give us enough room to love, truly love one another, making ours aÂ witness that lives into a loving way forward, accelerating the belief and the promise that there can be peace among us. A peach which graciously brings us together and more deeply into service for all those to whom we are called to love.

Maybe it is because kids are closer to the love of their Maker or closer to the ground that they get this so easily. Hopefully, it is this and because they see it in the way of those who love them,Â learning love from them. Whatever it may be, Martin is right. We owe his memory and all those who will follow him and us the acceleration of the promise that what we are passing on will be better, safer, fully welcoming and a gracious and abundant reflection of the Love that began it all.

Ray Bagnuolo, National Chaplain; That All May Freely Serve